Social media has ruined our planet.

The rules of common decency have become as irrelevant as Miller Genuine Draft, Atari and comedy that doesn’t emphasize poop jokes.

If you offer an opinion someone doesn’t agree with on Twitter, lock your kids, wife and dog in a safe house. And for the love of God, cover your ears and eyes.

The things people threaten to do on Twitter would make the inmates on “Oz” blush.

But it’s not just “Twitter tough” that shows the decline of the human species.

But all of the stupidity did get me thinking: What are the top moments ruined by social media?

This is a tough one, because there are so many to choose from.

The first is the photo from Ellen that broke Twitter at the Academy Awards.

There’s nothing like a bunch of self-important narcissists getting dolled up to rub noses with each other. But that photo was the horseradish on the side of an exquisite prime rib. It was the photo that marked the true low-point.

I usually like Ellen, but to sink to that level to impress the crowd was so Justin Bieber of her. The two look alike, don’t they?

Give me Billy Crystal, Jon Stewart or Robin Williams who are true comedians and don’t need to use such antics to gain credibility or get laughs.

Speaking of that lesbian Justin Bieber and those who follow him, those clueless rats known as Beliebers. If it weren’t for social media, the no-talent, self-entitled Canadian would be a has-been by now. Thanks Usher. 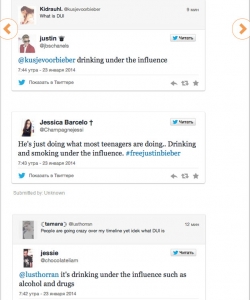 Perhaps if his moronic fans picked up a newspaper or went to class instead of getting their news from YouTube, they would know what a DUI is. Or perhaps they could put in the extra effort to visit Google and find out that way.

Those are the same People in and around Boston who want to be a modern-day “Magnum P.I.”

In the aftermath of the Boston Bombing on April 15, people went online in an effort to find the perpetrators. Of course, many innocent people were wrongly implicated in this digital vigilantism. Here’s a word of advice for those folks: Just because you own a smartphone and Twitter account doesn’t mean you’re a cop.

It’s just silly. Next time the authorities should tell them, “No thanks. We have this under control. Go back to misspelling three-letter words on Twitter.”

And then there’s this: Scott Simon, host of “Weekend Edition” tweeting the final moments of his mother’s life in July 2013. 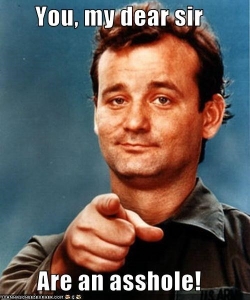 He should be there for his mother, holding her hand, kissing her, telling her how much he loves her and how much she means to him. Instead, this heartless asshole takes to Twitter before she even dies.

“Hold on mom, let me Tweet your final words to my followers. Wait, what did you say again? Wanna take a photo really quick?”

Was it to gain more followers? Did he spit all over what should have been a special, kindred moment so he could trend on Twitter?

Simon just couldn’t wait until his mom died to pick up his phone and take to social media. Good to know what really matters in his life.

The next one shows how addicted people are to the medium of social media: People who get upset if they see a spoiler for TV shows or sporting events.

Think about this: If you know you can’t watch a show or game live, why would you take to social media knowing full well people will talk about said show or game? What is truly amazing is when these same people respond to the person who spoiled it and get upset, thus the whole “Twitter tough” persona begins once again.

One of the best lines ever is from comedian Ron White.

With the advent of social media, there is no fix or end in sight.