Life is full of compromises

Working in an office sucks because you have to sit down all day. It’s well established that there are very few health benefits to sitting down all day.

Working outside sucks because you usually have to hustle and move heavy things around all day for little pay while people you don’t like pretend to “supervise” you.

Now there’s a way for people to become more active at work without quitting their office jobs and taking up construction. It’s called a treadmill desk. And we have one here at Clicks and Clients.

Hard to stop once you start

I’m not going to lie. The treadmill desk gets used, but it’s not so popular that we fight over who gets to use it next. Chase uses it at least once a week. I’ve used it twice.

Everyone else thinks it’s cool, but they haven’t tried it yet.

I found the machine addictive the first time I used it. I didn’t want to use it again after I stopped, but once I got going it was hard to think about going back to my desk and working while sitting. I don’t know about you, but I really would rather be walking than sitting down.

It’s like any other exercise. It sucks to think about before you start doing it. But it feels great as soon as you get going.

A cure for procrastination?

It’s impossible to stand there and stare at the screen. If I’m already doing something like walking, it’s that much easier to start doing something else like writing. It’s easier for me to think about starting a work project if I’ve already started walking.

The treadmill desk is a great catalyst for starting work, in my opinion. It reduces friction between inactivity and activity by forcing me into an active state before I start my work. If you like to procrastinate, and your brain is wired a little like mine, then a treadmill desk might be what you need to make yourself more productive.

I think the treadmill desk is cool, but I see why other people might think it’s lame. Compulsory exercise has a decidedly totalitarian ring to it. Paul doesn’t force anyone to use the treadmill desk, but the fact that it’s there implies we should probably use it. Depending on the way you think, implied compulsory exercise could have a decidedly totalitarian ring to it, too.

Concerns like that seem pretty silly. It’s there for anyone who wants to use it. If you don’t want to use it, that’s fine too.

How ours is set up… 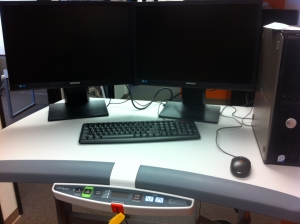 Our treadmill desk is basically a carbon copy of one of our workstations but with a treadmill instead of an office chair under the desk. We use desktop PCs and dual monitors, so that’s what we have on our treadmill desk. We set up user accounts for everyone who works here. I use DropBox to sync files between my desk and the treadmill desk. It works great the way we have it set up.

Now I just need to start using it more.