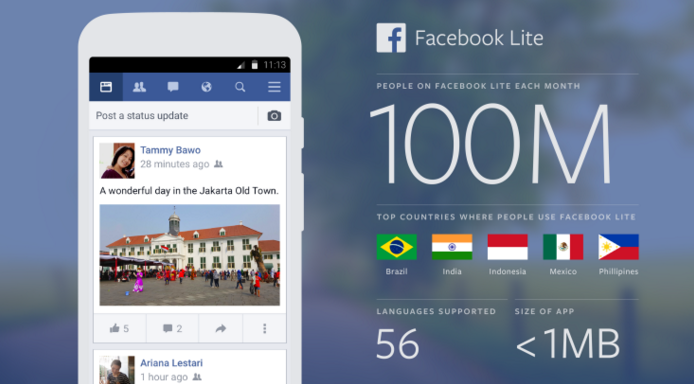 If you have the Facebook app on your phone, then you are (or should be) familiar with how much data it uses. Not only does it far surpass the amount of data other apps use; it also kills your phone battery exponentially faster. This is, in part, because of features on the Facebook app such as auto-stream and the app’s autonomous ability to cache information to storage (most likely for ad purposes).  Some have gone so far as to call the app, “user-hostile.” The issue has become so evident that Facebook has released “lighter” versions of their app and the stories that come with it.

The most notable release from Facebook regarding these new versions is an app called “Facebook Lite.” Facebook Lite has not yet been released within the U.S. but already has 100 million monthly users worldwide. Released to only 150 countries including India, Brazil, and Mexico, it has already become the fastest growing app Facebook has ever released. The goal of the app is minimize data expenditure. It only takes up 1MB of space, compared to Facebook’s main app which starts off at 42MB when first downloaded.

While the app is a huge plus for mobile users, it seems the reasoning for “Facebook Lite” revolves more around Facebook accessibility rather than the main app’s data issues. Zuckerberg’s mission to provide internet accessibility (and thus Facebook accessibility) worldwide has been highly publicized recently and it appears this app is another step in that direction. Facebook Lite’s main purpose is to provide access to Facebook for users who may have low-cost smartphones or poor internet connection. Nevertheless, we hope it gets released in America soon as well, because the current app significantly reduces the performance of our smartphones – and no app is worth additional lag.