Paid Social Can Take Your Company to New Heights 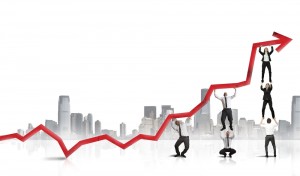 We recently took on a PPC and social advertising client in a familiar situation.

Nothing it tried was working.

We took over the account and implemented our strategy, only to find the same thing happened to us. Internet marketing can be very frightening. Spending a lot of money and getting few results can send anyone into a panic. There are times we want to hyperventilate as well.

So much of this business is unpredictable.

No matter what was tried, the same problem kept popping up: The messaging wasn’t on track and targeting was a mess, which meant the click-through rate was non-existent. When it comes to pay-per-click and paid social advertising, that’s a trifecta of awful.

It wasn’t until we took a step back and looked at the big picture that we were able to push through these obstacles and help our client reach new heights.

The client had its goals and the strategy was in place to reach those goals. Everything was right there, but nothing would cooperate.

The method used for this particular client and campaign was cost-per-click bidding. It would bid high for specific and bid low for broad. It was also running on lifetime budgets.

As the campaign ran for months, it became ingrained with mediocre performance as a sort of “advertiser’s curse.” Bread and butter audience targeting worked to an extent, but trying to increase spend while maintaining the desired CPL was frustratingly difficult.

The cause stemmed from various issues, including cost-per-click-bidding, lifetime budgeting and audience targeting. It would bid high for specific, highly targeted audiences and bid low on more broad, general audiences.

The creative assets were old and though iterations improved their performance there was a definite cap to what they were producing. The images were not edited to include any text and they didn’t really sell the product as much as they represented a general image appropriate for the entire industry.

The client wanted to test one specific region with an “unlimited budget” to get him as many leads as possible for that area.

The first attempt at throwing out the book and rewriting the way to advertise for this account went horribly wrong.

The idea was to try to target people in the various parts of their lives, and sell the same product in a different way. For example: Target 30- to 40-year-old men who are single with no children; and try to pitch the idea of living that sweet, single life with an early retirement. Conversely, target a married woman with kids and message that she could have a savings account for her kids using our client’s products. Then try anything and everything in between to get it to those people to click.

There was no doubt this would work. In fact, the thought of how well this would perform brought forth a sense of geeked out emotion. There was no way it would fail.

Then bewilderment. Why were the campaigns performing so poorly with the correct targeting and right creative assets?

Subtle changes were made. Nothing.

Scrap it and try again. Nothing.

The cycle kept repeating itself over and over. It was as if this was Internet marketing “GroundHog Day.”

“Why isn’t this campaign working?”

As a company, we strive to get the best results for our clients. We deliver on that promise every time, no matter how long it takes or how hard it becomes. When we set our mind to it, we accomplish everything.

If we can’t make our promises come to life, we don’t make them. That’s just how we function as a company.

This was a struggle because we kept hitting the wall.

It was as if this campaign was Lucy and we were Charlie Brown, and every time we tried to kick the ball, she pulled it away. We kept telling ourselves: “This time this ad will deliver. I know it. This is the time. Ad is launched and it still doesn’t convert at the rate we expect. Guess I’ll try again later. Thanks, Lucy.”

This is not to say there weren’t conversions from what we used. We just knew we could do better. We knew the client deserved better.

We expect big things to happen when we do them.

If that doesn’t happen, we keep working until it does.

We needed to dig a little deeper to find the solution.

We were trying too hard.

We wanted it so badly we started to drive ourselves nuts.

We took a mental break to get away from it.

Once we stopped thinking about it, the solution came. Sometimes when you give your brain the time to think without pressure, more often than not it delivers. The only thing you can do is be patient. Don’t rush it.

When we took that approach, we found the answer.

We threw out the book and tried something that had never been done before. We thought outside the box.

There were display ads on Google that had time and date location with them. “Why not try that with Facebook?”

There was a slight uptick when this new strategy was implemented.

There were new images that were pulled, and text was put on those images to test the effectiveness.

But the reason all of this was successful was because the audience we were trying to reach had became very broad in scope, as opposed to being very specific at the beginning.

The change was made in the lifetime to daily budgeting and adjusted  bids to  oCPM bidding using Actions as our conversion modifier.

The results finally started to come in. Yeah, did they ever.

Over the course of July to September, spend increased by 173%, registrants increased by 196% and the CPL was actually lower in September than in June. That’s how you know this was the right strategy. And the fact that the cost-per-lead is lower hammers that point home, and proves how effective this strategy was.

This had never been done before so there was nothing to base it on. No case studies to ease the nerves. But it had to be done. With the lack of success and results for this client, it took bold action to get here. It required the ability to think outside the box and try something wild. The only way to find out if it would work was to do it.

Since it worked, what other campaigns can could this work for? What other clients could see these same results if we used this similar strategy?

There is still room for improvement.

We can do more audience testing and still make more money without spending a lot.

The key is to manage the account, and fight off audience and ad fatigue. Attention to the details like campaign timing, demographic data, ad copy testing and continually rejecting good performance while striving for excellent continues. We always know we can do more, and that’s exactly what we’ll continue to do.

But in this one instance, it wasn’t frightening how well Internet marketing worked (even if we doubted the scalability of Facebook ads). And it’s exhilarating how much of an impact this has had for our client’s business.

Get connected to your ideal customers.